The Novel of the Century

Victor Hugo began writing Les Misérables in 1845 in Paris, France. However, Hugo moved to live in exile soon after Napoleon III came to power in 1851, completing Les Misérables as well as several other works on Guernsey, a British island in the English Channel.

The final manuscript came to be some 1500 pages and took seventeen years to complete. The book was published in 1862 by Lacroix, Verboeckhoven & Co, a fledgling Belgian publishing house. According to David Bellos, author of the book The Novel of the Century: The Extraordinary Adventure of 'Les Misérables,' Hugo's advance for an eight-year publishing license of Les Mis was the equivalent of about $3.8 million in today's dollars! The book was published to near-immediate acclaim.

It is said that Hugo drew inspiration for Les Mis from his personal experiences and observations of people in Paris: a man being arrested for stealing a loaf of bread, a woman playing with her child, and his own experiences seeing bullets and barricades in the streets of Paris. 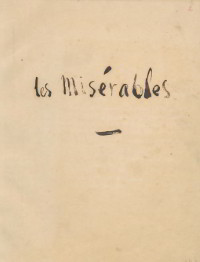