Undoubtedly the most famous adaptation of Les Misérables is the musical production by composer Claude-Michel Schönberg and lyricist Alain Boublil, with English language lyrics written by Herbert Kretzmer. The musical premiered at Palais de Sports in Paris in 1980. The English language premier was at the Barbican Arts Centre in London in 1985. Today, it is the longest-running musical at London's West End, and the fifth longest-running musical on Broadway.

The musical has accumulated some very impressive stats since its 1980 opening night:

Besides English, the musical has been translated into German, Spanish, Japanese, Hebrew, Korean, Dutch, Swedish, Danish, and numerous other languages. 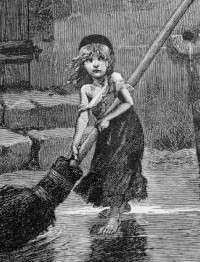 The most famous image representing Les Misérables: an engraving of Cosette by Émile Bayard, made in 1886.